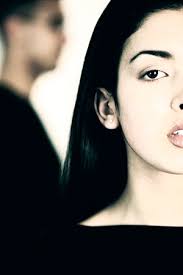 My Boyfriend and I are Struggling with Temptation

Hi, I would like to ask you a question.I am 16 years old. I have a 19 year old boyfriend. We have been together for almost 7 months. We waited to have our first kiss until a few weeks ago mainly because of me. I was nervous and also, he was my first kiss. (We are both Christians and love the Lord strongly.)  I often go to his house in the afternoon inbetween church services. He usually ends up kissing me, and I end up kissing him back. (I guess I should say we “make-out” on the couch.) Anyway, I like it but I don’t. I pull away and try to distract him by telling him “I don’t feel well,” or I say something else. I know that I need to tell him that I don’t want to be kissed all the time. Like, I feel as though when he says he misses me, that he doesn’t miss me, he misses my body. He is always making comments about my chest and how “beautiful” I am. I know I have low self esteem but if he really means it, he’s going over board with the comments. I’ve asked him before if he’s had trouble with lust and he told me that the only thing he can remember is that he lusted after his girlfriends… Doesn’t make me feel too good! I know this will seem strange, but I feel guilty once and a while after I’ve been with him. (When were on his couch kissing …)
My boyfriend told me that a while ago, (maybe 4 or 5 years) he had a problem with lust. I know that since it has surfaced that there is a great chance that he still deals with it. But, honestly, he is trying to get over it. I know that I myself am struggling a bit with this issue also. I hate it. I can’t believe some of the things I think. It’s not like me at all. I also want to tell you that hes seems to really enjoy kissing me. I don’t really enjoy it anymore. I don’t know if I ever have. Maybe it’s because I’m too young? Which reminds me, how do I know when he is getting turned on? I’m really scared about that. I have strong morals and so does he. I just know that everything can change quickly….

Answer:
Dear Anna: Thanks for writing & for your honesty. I am so thankful that you desire to obey the Lord in your relationship. But since you have so many concerns, I recommend that you place boundaries on and be in control of the physical part of your relationship with your boyfriend. He is much more experienced sexually which will make it easier for him to fall into temptation. Since you desire to follow biblical standards in keeping your relationship pure, I would advise you to take the following steps to guard yourself from going” too far”…

1. Pray about what the Lord would have you do in this relationship.
You have a very strong sense of morals and desire to please the Lord. You are already feeling unsettled about how far the physical aspect of this relationship is going. It seems to me that the Holy Spirit is convicting you that this is not a God-honoring relationship. Read scriptures which will help you get closer to Christ, build your character, give you incentive to maintain self-control, make wise decisions and guard your purity.

2. Protect yourself by limiting time spent alone together.
Do things together in public places and in groups or with friends. Don’t go to your boyfriend’s apartment unless you go there with other friends. You said you are concerned about knowing when he gets “turned on”. Well, it does not take long for a man to get excited sexually since their hormones (testoterone) respond quickly to visual, auditory and sensual stimuli.
You are concerned about the provocative comments he makes about you, etc. I think you should be very concerned and thus, cautious since by these comments he is trying to tempt you sexually and expressing what is on his mind. Most likely he has had sexual intercourse with other girls. And once someone has had intercourse/sexual relations he/she will have a greater propensity (it will be a greater temptation) to want to do it again. Thus, he will have less control and will try to persuade you to do it eventually. Don’t be naive about it. Though he is a Christian.. many Christians have fallen into this temptation.
He has already warned you that he has a problem with lust. Guard yourself. Another thought: If something happens and you end up giving in to him, you will feel you have been pressured into it and he could be charged with rape, since you are a minor and he is considered an adult (being 18 years old) in this society.

3. You may want to stop dating altogether.
Until you are older and ready to marry you may want to stop dating because sex is such a temptation for teens and singles. I know a lot of teens and singles now who have stopped dating and are socializing in groups of Christian friends instead. It sounds like your relationship is a very serious one since you have been dating for 7 months. Since you are only 16 and not wanting, even fearing getting involved physically, you might want to stop the “dating” scene completely.
Have you read the Christian books I Kissed Dating Goodbye by Joshua Harris or Why True Love Waits by Josh McDowell ?
You might want to challenge other Christian friends to read these books so you can support each other to live by the guidelines promoted by these authors.

4. Inform yourself of the consequences of engaging in premarital sex.
You must already know the many harmful consequences of falling into sexual immorality: besides sinning against God and feeling alienated by Him, there are sexually transmitted diseases, AIDS (which is deadly); pregnancy, psychological turmoil, and couples breaking up over it.
I had someone in my office recently who contracted herpes from her boyfriend. Herpes is a painful and incurable sexually transmitted disease which will plague her for the rest of her life. She feels like her life is over at age 23 and that she will never be able to have another relationship because of it.
The psychological and spiritual turmoil that comes after one has committed sexual immorality has very detrimental effects on one’s life.

5. Build your self-esteem and identity.
Anna, you wrote: “I know I have low self-esteem” Low self-esteem can make you compromise your standards just to be liked or loved by someone. It can keep you from doing what you really want to do- which is to please the Lord. You also wrote, “I know that I myself am struggling a bit with this issue also. I hate it. I can’t believe some of the things I think. It’s not like me at all. I also want to tell you that my boyfriend seems to really enjoy kissing me. I don’t really enjoy it anymore. I don’t know if I ever have. Maybe it’s because I’m too young?  I have strong morals and so does he. I just know that everything can change quickly….” Since this relationship is really bothering your conscience I would encourage you to take a break from it and take time to contemplate all the steps I have mentioned above. As you said…”Maybe I am too young?….and everything can change quickly.” Why put yourself in a situation where you will both be tempted to do things you don’t want to
do and harm your conscience, relationship with the Lord and possibly result in irreversible damage physically or in pregnancy. I know too many single parents who are not happy about their situations and the pressures they face everyday because they had a child out of wedlock. Marriage is a long way off. You need to find out who you are, grow in Christ and protect yourself from harm. You need to build your self-esteem so you know who you are and what you want in a man. I suggest reading The Search for Significance by Robert McGee

6. Contemplate how you can apply these scriptures to your life:

Christ will meet your needs. Put Him first in your life and He will help you, guide and strengthen you. Remember Joseph when he was seduced to commit sexual immorality by Potiphar’s wife…. he ran from the temptation. The Bible says in Gen 39:5-12 ” From the time he put him in charge of his household and of all that he owned, the LORD blessed the household of the Egyptian
because of Joseph. The blessing of the LORD was on everything Potiphar had, both in the house and in the field. So he left in Joseph’s care everything he had; with Joseph in charge, he did not concern himself with anything except the food he ate. Now Joseph was well-built and handsome, and after a while his master’s wife took notice of Joseph and said, “Come to bed with me!” But he refused. “With me in charge,” he told her, “my master does not concern himself with anything in the house; everything he owns he has entrusted to my care. No one is greater in this house than I am. My master has withheld nothing from me except you, because you are his wife. How then could I do such a wicked thing and sin against God?” And though she spoke to Joseph day after day, he refused to go to bed with her or even be with her. One day he went into the house to attend to his duties, and none of the household servants was inside. She caught him by his cloak and said, “Come to bed with me!” But he left his cloak in her hand and ran out of the house.” (NIV)

Kissing will tempt you to go further physically. Kissing stimulates the body sexually and you will be tempted to fall into immorality. Joseph did not allow himself to be alone in the house with Potiphar’s wife… he had a strong desire not to sin against the Lord..he fled from the temptation. Anna, get some support from your pastor or his wife. You need to be in prayer and counseling with someone who can give you biblical guidance.

I hope this helps you. God bless you. Let me know how you are doing. Also, read some of the articles below.
© copyright 2017 by Lynette J. Hoy, NCC, LCPC