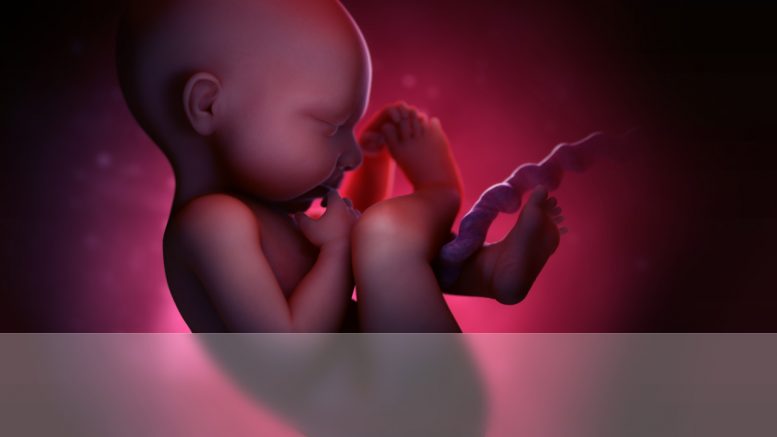 A picture began circulating in November. It should be “The Picture of the Year,” or perhaps, “Picture of the Decade.” It won’t be. In fact, unless you obtained a copy of the paper, you probably will never see it. The picture is that of a 21-week-unborn baby named Samuel, who is being operated on by a surgeon named Joseph Bruner. The baby was diagnosed with spina bifida and would not survive if removed from his mother’s womb.
Little Samuel’s mother is an obstetrics nurse in Atlanta. She knew of Dr. Bruner’s remarkable surgical procedure.Practicing at Vanderbilt University Medical Center in Nashville, he performs these special operations while the baby is still in the womb. During the procedure, the doctor removes the uterus via C-section and makes a small incision to operate on the baby. During the surgery on little Samuel, the little guy reached his tiny, but fully developed, hand through the incision and firmly grasped the surgeon’s finger. The photograph below captures this amazing event with perfect clarity.
The editors titled the picture, “Hand of Hope.” The text explaining the picture begins, “The tiny hand of 21-week-old fetus Samuel Alexander Armas emerges from the mother’s uterus to grasp the finger of Dr. Joseph Bruner as if thanking the doctor for the gift of life.”
Little Samuel’s mother said they “wept for days” when they saw the picture. She said, “The photo reminds us my pregnancy isn’t about disability or an illness, it’s about a little person” “The Hand” of the fetus. You can see the actual picture, and it is awesome…incredible. This “Fetal Hand Grasp” photo was taken by Michael Clancy. Pass it on. The world needs to see this one.

Published by the The Tennessean 9/7/99, the NRLC and Focus on the Family. Dr. Dobson’s comments on the photo of Samuel Adams.

Considering Abortion?
Abortion will not resolve the fears that you have. It will only increase the psychological issues and bring about an unbearable guilt that few talk about. Abortion comes with great risk of complications as well. Some women have experienced infertility and reproductive problems. Some have even died. Counseling and pastoral offices are full of women who are grieving the pain and guilt of abortion. Please write and visit the Pregnancy Centerssite for help. Call them at: 1-800-848-Love.  International Pregnancy Centers listing.

Consider the claims and person of Jesus Christ:
Christ is more than a system, tradition, or belief. He claimed to be God. His miracles proved His deity. Josh McDowell writes, “Among the religious leaders who have attained a large following throughout history, Jesus Christ is unique in the fact that He alone claimed to be God in human flesh. A common misconception is that some or many of the leaders of the world’s religions made similar claims, but this is simply not the case. Budda did not claim to be God; Moses never said that he was Yahweh; Muhammad did not identify himself as Allah…  Jesus said that he who has seen Him (Jesus) has seen the Father (John 14:9). …Anyone who would dare to make such claims… to forgive sins, to raise Himself from the dead, etc…would have to be either out of his mind or a liar, unless he was (in fact) God.” (from: Answers to Tough Questions Skeptics Ask about the Christian Faith by Josh McDowell and Don Stewart).

Jesus is also a Person who knows our needs, feels our pain, and sympathizes with our weaknesses. If you are considering abortion consider first the claims that Jesus makes, the plan that Jesus has for your life and for the life of the “tiny hand of hope” residing in your womb. He offers to forgive our sins, and to give us the free gift of eternal life…making peace between us and His Father when we decide to trust Him as Lord and Savior of our lives. He loved us so much that He died for our sins 2,000 years ago. He offers to provide for your needs and walk with you in your journey through life.
The Bible says that we are sinners: Rom 3:23-24 “for all have sinned and fall short of the glory of God,” (NIV) But that God has provided Jesus as the Savior: John 3:16 says:  “For God so loved the world that he gave his one and only Son, that whoever believes in him shall not perish but have eternal life. (NIV)
The Bible also says that we can receive Jesus Christ as our Savior and have eternal life:John 3:36: “Whoever believes in the Son has eternal life, but whoever rejects the Son will not see life, for God’s wrath remains on him.” (NIV)
Read the following articles for more information on how to grow in your faith See alsoGod’s Plan for Our Success.