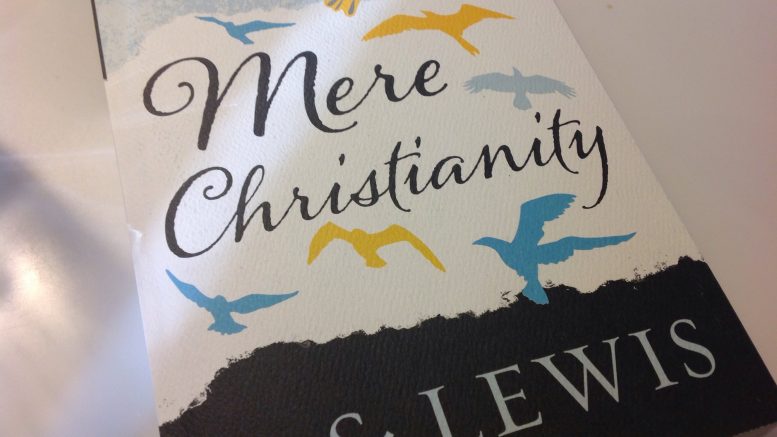 Mere Christianity is a revised and enlarged edition of the three books produced from C.S. Lewis’ radio broadcasts in England during World War II: The Case for Christianity, Christian Behaviour, and
Beyond Personality. Here is the outline for Mere Christianity:

Book I. RIGHT AND WRONG AS A CLUE TO THE MEANING OF THE UNIVERSE. 1.) The Law of Human Nature (Where Lewis begins by saying, “Every one has heard people quarrelling,” then goes on to talk about the moral law people appeal to when they argue.) 2.) Some Objections 3.)The Reality of the Law 4.) What Lies Behind the Law 5.) We Have Cause to Be Uneasy

Book II. WHAT CHRISTIANS BELIEVE 1.) The Rival Conceptions of God 2.) The Invasion 3.) The Shocking Alternative (where Lewis presents his claims that Jesus of Nazareth was either God incarnate, a liar, or a lunatic, but not merely a good moral teacher.) 4.) The Perfect Penitent 5.) The Practical Conclusion

Book IV. BEYOND PERSONALITY: OR FIRST STEPS IN THE DOCTRINE OF THE TRINITY
1.) Making and Begetting 2.) The Three-Personal God 3.) Time and Beyond Time 4.) Good Infection 5a.) The Obstinate Toy Soldiers 6.) Two Notes 7.) Let’s Pretend 8.) Is Christianity Hard or Easy? 9.)
Counting the Cost 10.) Nice People or New Men 11.) The New Men

In his preface, Lewis wrote, “The reader should be warned that I offer no help to anyone who is hesitating between two Christian “denominations.” You will not learn from me whether you ought to become an Anglican, a Methodist, a Presbyterian, or a Roman Catholic. . . Ever since I became a Christian I have thought that the best, perhaps! the only, service I could do for my unbelieving neighbours was to explain and defend the belief that has been common to nearly all Christians at all times.” This was Lewis’s purpose in creating this book, to discuss what Baxter called “mere” Christianity, or the bare essentials that should be common to all Christians. In a book that is less than 200 pages long, it is amazing that Lewis was able to accomplish such a task. Regardless of whether you are already a Christian, or someone who is interested only in what it is that Christians believe, this concise book explains the basics in an engaging fashion.
Order C.S.Lewis’ book: Mere Christianity, or The Problem of Pain .

Sample quote from C. S. Lewis, converted atheist, in Mere Christianity… “I am trying here to prevent anyone saying the really foolish thing that people often say about Him: “I’m ready to accept Jesus as a great moral teacher, but I don’t accept His claim to be God.” That is the one thing we must not say. A man who was merely a man and said the sort of things Jesus said would not be a great moral teacher. He would either be a lunatic-on the level with the man who says he is a poached egg-or else he would be the Devil of Hell. You must make your choice. Either this man was and is, the Son of God: or else a madman or something worse. You can shut Him up for a fool, you can spit at Him and kill Him as a demon; or you can fall at His feet and call Him Lord and God. But let us not come with any patronising nonsense about His being a great human teacher. He has not left that open to us. He did not intend to.”

Read the article on Faith for more information on Christ and Christianity.