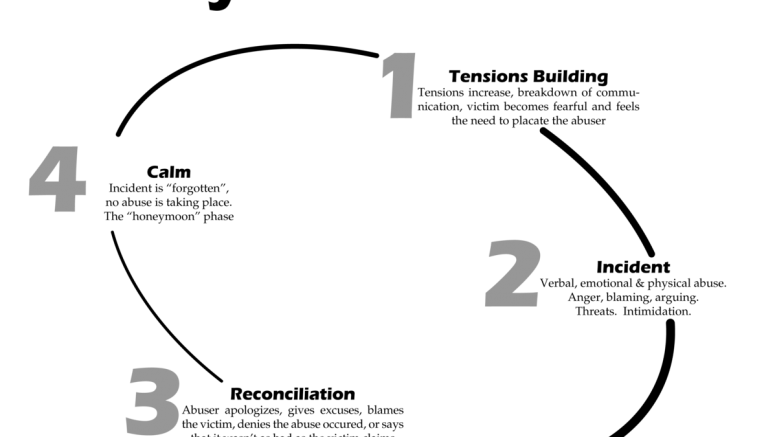 First of all – Battering is a crime. It is a pattern of behavior which often uses the threat of or the use of violence. Battering occurs when individuals try to take control of the other partner through intimidation, emotional abuse, economic abuse, sexual abuse, physical abuse, male privilege, isolation which results in fear and intimidation. One person believes they are entitled to control another.

Assault, battering and domestic violence are crimes. “The perpetrators are most commonly the men of the family. Women are most commonly the victims of violence. Elder and child abuse are also prevalent. Acts of domestic violence generally fall into one of the following categories:
– Physical Battering – The abuser’s physical attacks or aggressive behavior can range from bruising to murder. It often begins with what is excused as trivial contacts which escalate into more frequent and serious attacks.
– Sexual Abuse – Physical attack by the abuser is often accompanied by, or culminates in, sexual violence wherein the woman is forced to have sexual intercourse with her abuser or take part in unwanted sexual activity.
– Psychological Battering -The abuser’s psychological or mental violence can include constant verbal abuse, harassment, excessive possessiveness, isolating the woman from friends and family, deprivation of physical and economic resources, and destruction of personal property.

“Battering has little to do with what the women do or don’t do, what they say or don’t say. It is the batter’s responsibility- and his alone- to stop being abusive.”…”Battering is not just physical agression, but physical aggression that serves a function. That function is control.” When Men Batter Women by Gottman and Jacobsen

” Battering escalates. It often begins with behaviors like threats, name calling, violence in her presence (such as punching a fist through a wall), and/or damage to objects or pets. It may escalate to restraining, pushing, slapping, and/or pinching. The battering may include punching, kicking, biting, sexual assault, tripping, throwing.
Finally, it may become life-threatening with serious behaviors such as choking, breaking bones, or the use of weapons.” Resource: National Coalition Against Domestic Violence

There are two types of batterers:
Cobras and Pitbulls. “Cobras become still and focused just before striking the victim…and were more severely violent than the other batterers. .. more likely to use a a knife or a gun on their wives. Pitbulls ….exhibited anger as a kind of slow burn, gradually increasing it in a domineering and threatening fashion over the 15 minute conflict discussion but never letting up…..grwoing increasingly aggressive until they finally attack.” Gottman and Jacobsen

If you are in an abusive relationship – please call the National Domestic Violence hotline at: 1-800-799-7233
Read: Protecting Yourself in An Abusive Relationship, What Does it Mean to Be a Submissive Wife? and other Domestic-Violence FAQs.
Resource: Love Without Compassion is Controlling and Dangerous
By Lynette J. Hoy, NCC, LCPC, Domestic Violence Advocate