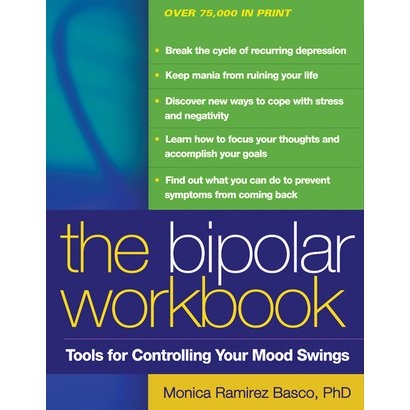 WHAT IS BIPOLAR DISORDER? Bipolar disorder, which is also known as manic-depressive illness and will be called by both names throughout this publication–is a mental illness involving episodes of serious mania and depression. The person’s mood usually swings from overly “high” and irritable to sad and hopeless and then back again, with periods of normal mood in between. Bipolar disorder typically begins in adolescence or early adulthood and continues throughout life. It is often not recognized as an illness, and people who have it may suffer needlessly for years or even decades. Effective treatments are available that greatly alleviate the suffering caused by bipolar disorder and can usually prevent its devastating complications. These include marital break-ups, job loss, alcohol and drug abuse, and suicide. Here are some facts about bipolar disorder.

AWARENESS
Manic-Depressive Illness Has a Devastating Impact on Many People. At least 2 million Americans suffer from manic-depressive illness. For those afflicted with the illness, it is extremely distressing and disruptive. Like other serious illnesses, bipolar disorder is also hard on spouses, family members, friends, and employers. Family members of people with bipolar disorder often have to cope with serious behavioral problems (such as wild spending sprees) and the lasting consequences of these behaviors. Bipolar disorder tends to run in families and is believed to be inherited in many cases. Despite vigorous research efforts, a specific genetic defect associated with the disease has not yet been detected. Bipolar illness has been diagnosed in children under age 12, although it is not common in this age bracket. It can be confused with attention-deficit/hyperactivity disorder, so careful diagnosis is necessary.
D/ART: A National Educational Program The National Institute of Mental Health (NIMH) has launched the Depression/Awareness, Recognition, and Treatment (D/ART) campaign to help people: Recognize the symptoms of depressive disorders, including bipolar disorder Obtain an accurate diagnosis Obtain effective treatments D/ART Also: Encourages and trains health care professionals to recognize the signs of manic-depressive illness and utilize the most up-to-date treatment approaches Organizes citizens’ advocacy groups to extend the D/ART program Works with industry to improve recognition, treatment, and insurance coverage for depressive disorders.

RECOGNITION
Bipolar disorder involves cycles of mania and depression. Signs and symptoms of mania include discrete periods of:
..Increased energy, activity, restlessness, racing thoughts, and rapid talking.
..Excessive “high” or euphoric feelings.
..Extreme irritability and distractibility.
..Decreased need for sleep
..Unrealistic beliefs in one’s abilities and powers
..Uncharacteristically poor judgment
..A sustained period of behavior that is different from usual Increased sexual drive
..Abuse of drugs, particularly cocaine, alcohol, and sleeping medications ..Provocative, intrusive, or aggressive behavior
..Denial that anything is wrong
..Signs and symptoms of depression include discrete periods of: ..Persistent sad, anxious, or empty mood
..Feelings of hopelessness or pessimism
..Feelings of guilt, worthlessness, or helplessness
..Loss of interest or pleasure in ordinary activities, including sex ..Decreased energy, a feeling of fatigue or of being “slowed down”
..Difficulty concentrating, remembering, making decisions
..Restlessness or irritability
..Sleep disturbances Loss of appetite and weight, or weight gain
..Chronic pain or other persistent bodily symptoms that are not caused ..by physical disease
..Thoughts of death or suicide; suicide attempts

It may be helpful to think of the various mood states in manic-depressive illness as a spectrum or continuous range. At one end is severe depression, which shades into moderate depression; then come mild and brief mood disturbances that many people call “the blues,” then normal mood, then hypomania (a mild form of mania), and then mania. Some people with untreated bipolar disorder have repeated depressions and only an occasional episode of hypomania (bipolar II). In the other extreme, mania may be the main problem and depression may occur only infrequently.
In fact, symptoms of mania and depression may be mixed together in a single “mixed” bipolar state. Descriptions provided by patients themselves offer valuable insights into the various mood states associated with bipolar disorder:
Depression: I doubt completely my ability to do anything well. It seems as though my mind has slowed down and burned out to the point of being virtually useless….[I am] haunt[ed]…with the total, the desperate hopelessness of it all… Others say, “It’s only temporary, it will pass, you will get over it,” but of course they haven’t any idea of how I feel, although they are certain they do. If I can’t feel, move, think, or care, then what on earth is the point?
Hypomania: At first when I’m high, it’s tremendous…ideas are fast…like shooting stars you follow until brighter ones appear…all shyness disappears, the right words and gestures are suddenly there…uninteresting people, things, become intensely interesting. Sensuality is pervasive, the desire to seduce and be seduced is irresistible. Your marrow is infused with unbelievable feelings of ease, power, well-being, omnipotence, euphoria…you can do anything…but, somewhere this changes.
Mania: The fast ideas become too fast and there are far too many…overwhelming confusion replaces clarity…you stop keeping up with it–memory goes. Infectious humor ceases to amuse. Your friends become frightened…everything is now against the grain…you are irritable, angry, frightened, uncontrollable, and trapped. Recognition of the various mood states is essential so that the person who has manic-depressive illness can obtain effective treatment and avoid the harmful consequences of the disease, which include destruction of personal relationships, loss of employment, and suicide. Manic-depressive illness is often not recognized by the patient, relatives, friends, or even physicians. An early sign of manic-depressive illness may be hypomania–a state in which the person shows a high level of energy, excessive moodiness or irritability, and impulsive or reckless behavior. Hypomania may feel good to the person who experiences it. Thus, even when family and friends learn to recognize the mood swings, the individual often will deny that anything is wrong. In its early stages, bipolar disorder may masquerade as a problem other than mental illness. For example, it may first appear as alcohol or drug abuse, or poor school or work performance. If left untreated, bipolar disorder tends to worsen, and the person experiences episodes of full-fledged mania and clinical depression.

TREATMENT
Most people with manic depressive illness can be helped with treatment. Almost all people with bipolar disorder–even those with the most severe forms–can obtain substantial stabilization of their mood swings. One medication, lithium, is usually very effective in controlling mania and preventing the recurrence of both manic and depressive episodes. Most recently, the mood stabilizing anticonvulsants carbamazepine and valproate have also been found useful, especially in more refractory bipolar episodes. Often these medications are combined with lithium for maximum effect. Some scientists have theorized that the anticonvulsant medications work because they have an effect on kindling, a process in which the brain becomes increasingly sensitive to stress and eventially begins to show episodes of abnormal activity even in the absence of a stressor. It is thought that lithium acts to block the early stages of this kindling process and that carbamazepine and valproate act later. Children and adolescents with bipolar disorder are generally treated with lithium, but carbamazepine and valproate are also used. Valproate has recently been approved by the Food and Drug Administration for treatment of acute mania. The high potency benzodiazepines clonazepam and lorazepam may be helpful adjuncts for insomnia. Thyroid augmentation may also be of value. For depression, several types of antidepressants can be useful when combined with lithium, carbamazepine, or valproate. Electroconvulsive therapy (ECT) is often helpful in the treatment of severe depression and/or mixed mania that does not respond to medications. As an adjunct to medications, psychotherapy is often helpful in providing support, education, and guidance to the patient and his or her family. Constructing a life chart of mood symptoms, medications, and life events may help the health care professional to treat the illness optimally. Because manic-depressive illness is recurrent, long-term preventive (prophylactic) treatment is highly recommended and almost always indicated.

Getting Help
Anyone with bipolar disorder should be under the care of a psychiatrist skilled in the diagnosis and treatment of this disease. Other mental health professionals, such as psychologists and psychiatric social workers, can assist in providing the patient and his or her family with additional approaches to treatment. Help can be found at: University- or medical school-affiliated programs Hospital departments of psychiatry Private psychiatric offices and clinics Health maintenance organizations Offices of family physicians, internists, and pediatricians People With Manic-Depressive Illness Often Need Help To Get Help. Often people with bipolar disorder do not recognize how impaired they are or blame their problems on some cause other than mental illness. People with bipolar disorder need strong encouragement from family and friends to seek treatment. Family physicians can play an important role for such referral. If this does not work, loved ones must take the patient for proper mental health evaluation and treatment. If the person is in the midst of a severe episode, he or she may have to be committed to a hospital for his or her own protection and for much needed treatment. Anyone who is considering suicide needs immediate attention, preferably from a mental health professional or a physician; school counselors and members of the clergy can also assist in detecting suicidal tendencies and/or making a referral for more definitive assessment or treatment. With appropriate help and treatment, it is possible to overcome suicidal tendencies. It is important for patients to understand that bipolar disorder will not go away, and that continued compliance with treatment is needed to keep the disease under control. Ongoing encouragement and support are needed after the person obtains treatment, because it may take a while to discover what therapeutic regimen is best for that particular patient.
Many people receiving treatment also benefit from joining mutual support groups such as those sponsored by the National Depressive and Manic Depressive Association (NDMDA), the National Alliance for the Mentally Ill (NAMI), and the National Mental Health Association.
Families and friends of people with bipolar disorder can also benefit from mutual support groups such as those sponsored by NDMDA and NAMI.

***This is a publication by the National Institute of Mental Health . The contents of this material may not be fully endorsed by Hoyweb.com due to the omission of a Christian perspective but we believe these concerns and facts need to be considered seriously since these are based on research and psychological studies which have helped people dealing with these disorders.